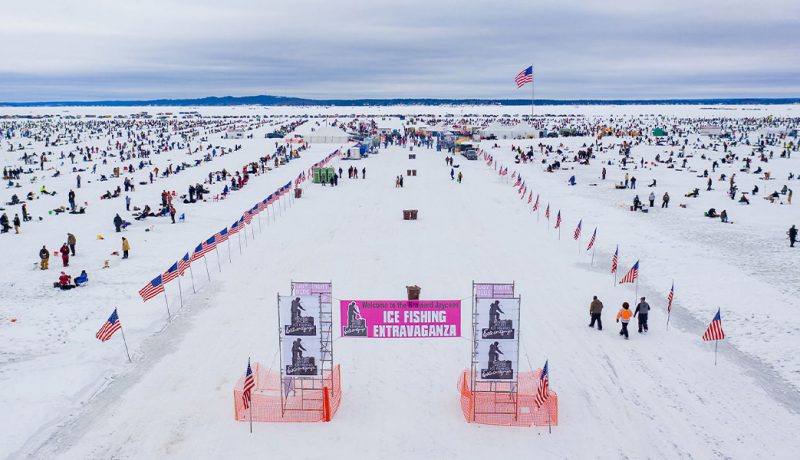 Brainerd, MN — The Brainerd Jaycees Ice Fishing Extravaganza is back with their in-person ice fishing contest held on Saturday, January 28th, 2023, at noon on Hole-in-the-Day Bay on Gull Lake. The Extravaganza draws over 10,000 anglers annually who compete for more than $200,000 in prizes. All proceeds from the event are donated to charities. Starting Tuesday, November 1st, 2022, annual sponsor, Fleet Farm begins their month-long early bird sale with contest tickets discounted to $35.00. This is the biggest sale on the Extravaganza tickets, so contestants will want to buy early to save. Catch of the Day and raffle tickets are also sold in Minnesota Fleet Farm stores this year as well. On December 1st contestants can find their $50.00 tickets at participating outlets.

First held in 1991, this event is hailed as the world’s largest charitable ice fishing tournament; event organizers have donated over $4 million to Brainerd‐area charities, most notably Confidence Learning Center, in its 32‐year history. The volunteer‐run event is organized by the Brainerd Jaycees who have over 90 members contributing more than 75,000 hours and over $200k to the community annually. This family-friendly event is a great way to spend the day, and it has a huge impact on the Brainerd Lakes Area.

For the most up-to-date information on the Gull Lake Tournament as well as more opportunities to win big or volunteer visit icefishing.org

The Ice Fishing Extravaganza is world-renown and has drawn more than 10,000 people annually for over 25 years. People and media from across the globe attend this event which is the world’s largest charitable ice fishing contest. “The charitable aspect plus the $200-thousand-dollar prize package is what keeps people coming,” said Sheena Ziegler, marketing coordinator for the Brainerd Jaycees.

The proceeds of the Ice Fishing Extravaganza are donated to more than 50 area charities with Confidence Learning Center as the primary beneficiary. The Brainerd Jaycees have donated more than $4.2 million since the event was founded.

The Brainerd Jaycees would like to thank participants, contestants, sponsors and area businesses for their ongoing support. Tickets can be purchased at Brainerd-area outlets and on the ice the day of the contest. Visit icefishing.org for all contest details.

First held in 1991, this event has been postponed three times and moved to a different lake once. Hailed as the world’s largest charitable ice fishing tournament, event organizers have donated over $4 million to Brainerd-area charities, most notably Confidence Learning Center, in its 30-year history. The volunteer-run event is organized by the Brainerd Jaycees who have over 90 members contributing more than 75,000 hours and $200,000 to the community annually.

Close the fish’s mouth. The nose should touch the bump of the measuring board (the belly is facing you). The measurement photo needs to include the entire fish on the board. If the fishtail is touching the graduation line on the board then that is the exact measurement. If the tail crosses a graduation line, round up ¼”.

If you have already purchased a physical ticket you will need to convert it to a FishDonkey registration to be eligible to win a fishing contest prize.

Please follow these steps to register for the Virtual Ice Fishing Extravaganza:

You are registered! Good luck on January 30!

Due to the ongoing pandemic and increasing travel restrictions, our committee has decided to offer a ticket exchange for any 2021 Extravaganza tickets purchased prior to our virtual announcement on 11/25/2020.

If you do not want to participate in the Brainerd Jaycees Virtual Ice Fishing Extravaganza you may return your ticket to us and receive a 2022 ticket next year.

Please mail your original tickets to Brainerd Jaycees – PO Box 523 – Brainerd MN 56401. Include your name, address, email and phone number as we will notify you when the tickets are received. The tickets must be postmarked on 12/20/2020 or before in order to receive the exchange. You will receive the 2022 Extravaganza tickets during the 4th quarter of 2021.